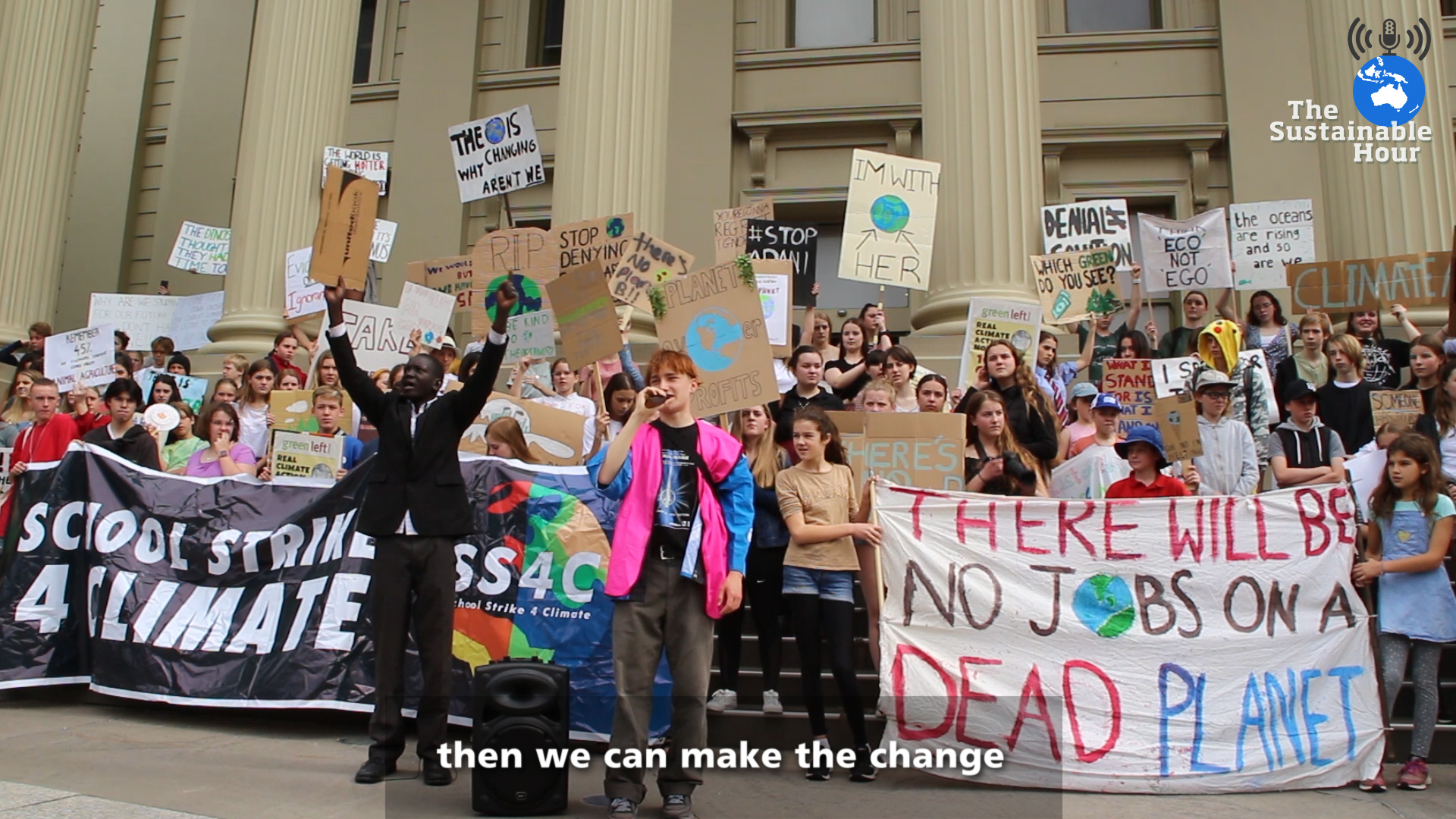 Share on Facebook
Support Councillor Sarah Mansfield’s motion to declare a climate emergency for Geelong by being present at Council’s meeting on Tuesday at Geelong City Hall. Councillor Sarah Mansfield’s proposed climate emergency declaration motion can be seen on page 129 in the agenda for Geelong Council’s meeting on Tuesday evening. A large crowd is expected to come to the City Hall once again, starting from 5:30pm, as it is expected that Cr Mansfield’s motion will be rejected by Liberal members of the Council at their meeting which starts at 7:00pm. They are likely to instead present Council to an amended version of the motion in which any mention of the expression ‘climate emergency’ has been censored. This is an example of the same kind of political gameplaying and protection of vested interests that has held Australia in a stalemate without any sensible climate or energy policy at the federal level for almost a decade. Or to put it another way: It looks like that instead of listening to their own community, where 78 per cent agree that “urgent action on climate change needs to be taken now”[1], these particular Councillors prefer listening to advice from those powerful industries from elsewhere whose polluting business model is disrupting the climate, threatening our safety and economic prosperity as it is now known to literally be putting all life on our planet at risk. Do you think they care? Come and see for yourself on Tuesday night at the City Hall council chambers.

“At the heart of this conflict is a battle between truth and science, and power and lies.” ~ Sheldon Whitehouse, American Senator

For more background info about why it is an emergency, have a look at this paper Paul Gilding published last week, ‘Climate Emergency Defined’:

[1] Research for the Victorian Government found that 78% of Geelong residents agree or strongly agree that urgent action on climate change is needed now.

NOTICE OF MOTION – by Cr Mansfield

CITY OF GREATER GEELONG RESPONSE TO CLIMATE EMERGENCY Background The Intergovernmental Panel on Climate Change (IPCC) consensus is that human induced climate change is occurring. Globally, based on current efforts to reduce carbon emissions, it is highly unlikely that targets set in the Paris Agreement will be met. Without greater scope and urgency of action at all levels of society, we will be unable to limit global temperature rises to a safe level for our children and future generations. Impacts associated with climate change on our region include: • a higher risk of bushfires during summer, particularly for those in rural and periurban areas of Geelong; • more hot days and heat waves, with the greatest impacts felt by residents with poorly insulated housing, chronic illnesses, low incomes, and by the very young and elderly; • lower average rainfall, which is already impacting on wildlife such as the eucalypts and koala populations in the You Yangs, affecting the Barwon river system, damaging parks and sporting grounds, and making local agriculture more challenging; • increased storm intensity, causing damage to infrastructure and increased insurance costs; • higher sea levels, leading to a greater likelihood of coastal erosion and inundation; • and increased costs of living, including food, water, energy and insurance for residents, and worsening inequality. The City of Greater Geelong has shown leadership by reducing carbon emissions as an organisation, and supported the community to do the same. Our Council Plan, Environment Management Strategy, Zero Carbon Emissions Strategy, Climate Change Adaptation Strategy and Risk Register highlight the importance of combating climate change. They include a broad range of actions which will enable the City to reach its emissions reduction target of 50% by 2020. Actions completed to-date include: • the installation of 21 rooftop solar systems; • assessing our coastline for sea level rise impacts; • development of an Environmentally Sustainable Design (ESD) Policy; • all new large Council buildings meeting a minimum 5 star standard; and • implementation of our Urban Forest Strategy. Council has worked in partnership with the community to develop a Community Zero Carbon Action Plan. This partnership approach will result in a reduction in community greenhouse gas emissions. Local communities, including our own, are asking their governments to declare a ‘Climate Emergency’ and to join the Climate Councils ‘Cities Power Partnership Program’ in response to the threats posed by climate change. The term emergency refers to the fact that current actions, while important, are inadequate, and more needs to be done at a much faster pace. The declaration is a way that governments can highlight that if we act urgently, it is still possible to restore a safe climate for future generations by acting collectively and accelerating actions to reduce its impacts. In order to address the climate emergency, a range of short, medium and long-term strategies are required, and cooperation between the public, private sector, community, and all three tiers of government is essential. As of 4 September 2019, climate emergency declarations were made by 990 jurisdictions covering 212 million people. This includes 45 local governments in Australia covering 5 million people, or 20% of the population. While individual jurisdictions alone have a limited impact on global climate carbon emissions, as a combined movement, the potential impact is significant. This motion aligns with our Council Plan, and our Environment Strategy, and One Planet Living Principles. Recommendation That Council: 1) Declare that climate change poses a serious and immediate risk to people in Geelong, Australia, and globally, and should be treated as an emergency; 2) Acknowledge the extensive local community interest and advocacy, including by our region’s young people, in relation to the declaration of a Climate Emergency; 3) Note and supports the successful motion to the Municipal Association of Victoria (MAV) May 2017 to recognise that we are in a state of ‘climate emergency’ that requires urgent action by all levels of government, including local Councils; 4) Note that the City of Greater Geelong, has had a strong record of reducing emissions, restoring and conserving biodiversity, and preparing our community for the impacts of climate change; 5) Note the City of Greater Geelong endorsement of, and continued commitment to the Our Coast Program and the following strategies Environment Management Strategy, Zero Carbon Emissions Strategy, Community Zero Carbon Action Plan, Climate Change Adaptation Strategy and Urban Forest Strategy; 6) Note the extensive range of local emission reduction actions being undertaken by Council, residents, schools, businesses and other organisations within the City of Greater Geelong; 7) Note that Council considers Climate Change to be a key strategic risk as part of its assessment of its risk environment; 8) Request management to seek to incorporate actions addressing the climate emergency within the next Environment Management Strategy, Biodiversity Strategy and Zero Carbon Emissions Strategy which will all be reviewed over the next 12 months. These actions should include: a review of COGG’s carbon emissions targets; measure to prepare for the impacts of climate change; collaboration with other Councils who are addressing the climate emergency to learn from their approaches to the issue; and strategies to engage, educate, and empower the local community regarding action to address the climate emergency; 9) Request the Chief Executive Officer to report to Council by the end of March 2020 outlining potential measures to incorporate consideration of the climate emergency into COGG’s strategy and operations across the organisation, and any resource implications. These measures must reflect the gravity and urgency of the climate emergency; 10) Write to state and federal Environment Ministers to advocate for more substantial and urgent action to reduce greenhouse gas emissions; and 11) Join the Climate Councils Cities Power Partnership Program. [MOTION ENDS]

“Look, it is just like when a Parliament declares a war or participates in a war. In itself it doesn’t do anything. It is the base on which they mobilise and prepare for that. And that is really what we need to do.” ~ Professor John Hewson, former leader of the Liberal Party, in The Sustainable Hour

The clip with Greta speaking at the World Economic Forum is from this video on Youtube: