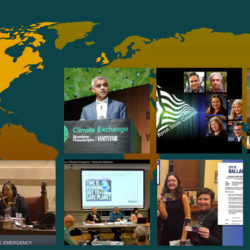 25 May 2019
Populations covered by local governments that have declared a climate emergency: 65 million citizens in 13 countries, with 29 million of these living in the United Kingdom, meaning more than 40 per cent of the UK population…
→ Read more

Video recordings of climate emergency speeches in chambers and halls

Discussions about the concept of declaring a climate emergency 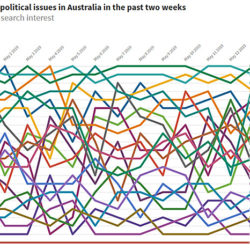 20 May 2019
Discussion in Hobart Council → ABC News – 21 May 2019: Hobart Council row erupts as members stage a meeting walkout against climate change motion “A row has erupted inside the walls of Hobart City Council over a motion to recognise climate change as a global emergency.” …
→ Read more

17 May 2019
On 16 May 2019, two regional councils in New Zealand made history by declaring a climate emergency as the first councils in the country, vowing to put climate change at the forefront of decision making. “At 11:49am on Thursday, Environment Canterbury councillors voted and made history, …
→ Read more

16 May 2019
“As the first Australian state or territory to declare a climate emergency, we’re setting the standard for climate action across Australia, and the world,” tweeted Shane Rattenbury, ACT Greens Leader and Minister for Climate Change in the Australian Capital Territory. On 16 May 2019 he moved a motion…
→ Read more

Region of Catalonia in Spain declares a climate emergency 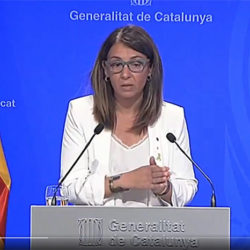 16 May 2019
On 15 May 2019, the Catalan government declared a climate emergency. Catalonia is a region comprising about 7.5 million people, who…
→ Read more

14 May 201921 May 2019
On 14 May 2019, Greenpeace supporters climbed the Harbour Bridge in Sydney, Australia, to demand that Prime Minister Scott Morrison declares a climate emergency. The action was streamed live on Facebook and Youtube just like a full news tv coverage with cameras on location, prerecorded interviews and commentators in the studio…
→ Read more

Climate emergency in the mainstream: clippings 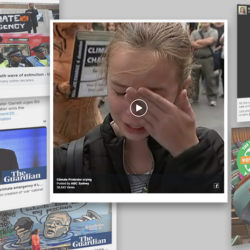 14 May 2019
Clippings from the climate emergency news and social media streams in May 2019 – Greta Thunberg tweeted: “Over 500 regional councils around the world have declared climate emergency. As well as 2 nations. Who’s next? #ClimateBreakdown #EcologicalBreakdown” …
→ Read more 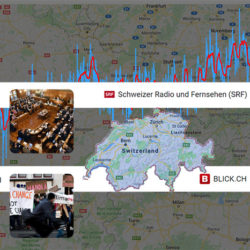 13 May 2019
In Switzerland, politicians and media commentators are discussing whether the climate emergency declarations and resolutions that have been declared in eight of the country’s cities and municipalities will lead to action at an entirely new level or eventually be overlooked as fluffy, non-binding policy statements …
→ Read more 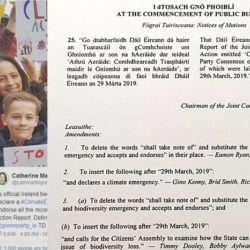 11 May 2019
“Its official. Ireland becomes 2nd country in the world to declare a #ClimateEmergency & Dáil also agreed to endorse all the recommendations of the Oireachtas Climate Action Report .Definitely one of the highlights for me as a @greenparty_ie TD. My children are thrilled.” By making an amendment…
→ Read more

Examples of news stories and articles

→ Al Jazeera – 25 May 2019:
School students strike worldwide, demand action on climate change
“Thunberg – who has been nominated for a Nobel Peace Prize – is urging governments to declare a climate emergency as has happened in Britain, Scotland and Ireland, a call echoed by many on European strikes.”

ITALY
→ Sky TG24 – 20 May 2019:
Environment climate emergency motion approved in Milan (article in Italian language)
“The Milan City Council approved the motion on the “climate and environmental emergency declaration” in the city. The document was presented by the councillor of the Democratic Party Carlo Monguzzi, and was approved with 31 votes in favour.”

POLAND
→ Refresher – 22 May 2019:
Prague 7 declared a state of climatic emergency (Article in Polish language)
“The City of Prague 7th District joins the call for climate protection.”

AUSTRALIA
→ Government News – 27 May 2019:
Cities at the forefront of ‘climate emergency’
“Local governments across Australia are taking a stand against what they say is federal climate inaction on the back of worldwide initiatives like Morocco’s famous ‘blue city’.”

→ The Age – 25 May 2019:
The environment: Establish a bipartisan ‘war cabinet’ on climate change
“With a climate emergency declared in the United Kingdom and the extinction of species, including pollinating insects which are essential to our food supply, occurring at a faster rate than ever before, it is time to look at emergency measures.”

→ The Age – 24 May 2019:
‘We’re worried the planet is dying’: Thousands of climate protesters bring CBD to standstill
“The protesters want the federal government to declare a climate and ecological emergency, and reduce greenhouse gas emissions to net zero by 2025.”

→ Newcastle Herald – 16 May 2019:
Shorten vows to tackle climate ’emergency’
“Labor leader Bill Shorten has toughened his stance on climate change, labelling it an emergency he vows he will prioritise if he becomes prime minister on Saturday.”

→ The Advertiser – 14 May 2019:
PM on Adani spat with CSIRO – the climate emergency – and the Harbour Bridge protest (video)
“The Prime Minister Scott Morrison answers questions on the Adani coal mine approval.”

“Surely what is required by the Earth that feeds us and so many other amazing creatures is a war-type, non-affiliated “cabinet”. It would include representatives from all sides of politics and be directed by non-politically aligned experts. (Any pecuniary interests would need to be declared.)

Structurally this could include an environmental wing of our armed forces (for example, the navy helping to clear plastics from our oceans and sewerage and chemical run-off which is destroying our Great Barrier Reef). It could provide school leavers with an interesting, voluntary, “national service” gap year of employment, and perhaps work and skills development for the unemployed.

Through the United Nations, we could suggest a co-operative approach between nations that could enhance eco-tourism and a sharing of innovative solutions.”
~ Steven Sommer, Highton

“This isn’t something we can wait for someone else to fix. We all need to act now. We can be leaders for change. Think globally, act locally.”
~ Ben Andrews – in a Facebook comment