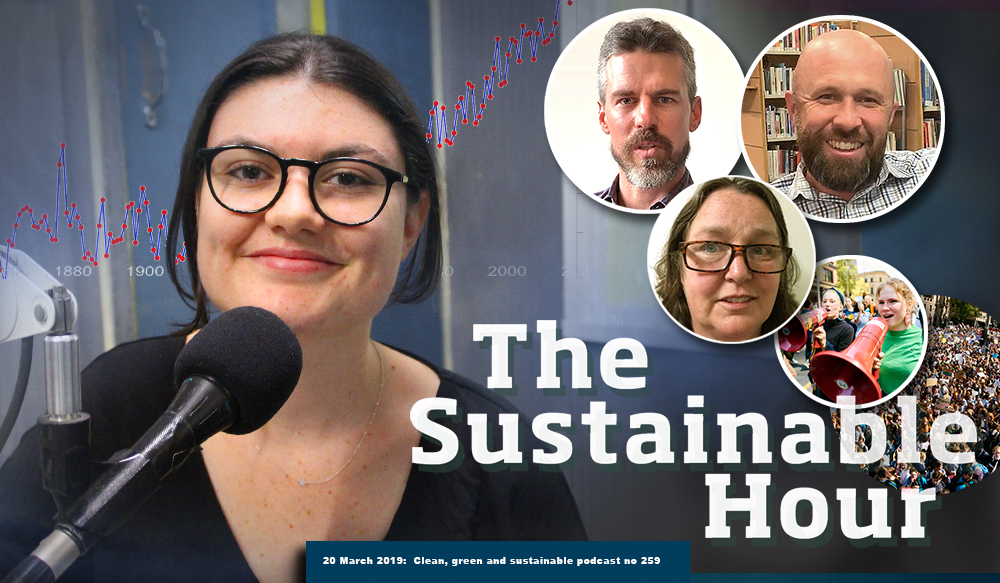 This page is an excerpt from www.climatesafety.info/thesustainablehour259 – with permission.

Guest in The Sustainable Hour on 94.7 The Pulse on 20 March 2019 was 19-year-old Alex Marshall from CACE Surf Coast & Geelong who’s calling for proper council action on the climate emergency, and leading the charge on the Surf Coast to follow the lead of over 400 other councils around the world that have declared a climate emergency – five of those in Victoria, 15 in Australia.

The Sustainable Hour team also talks over the phone with the officer at Darebin City Council whose job it is to get the practical stuff of a climate emergency sorted and making the Council’s decisions work for the community and the officers: Samantha Green from the municipality’s Environmental Education & Promotions Office.

“There is support for declaring a climate emergency, taking action. It is seen as serious and urgent by a majority of people.”
~ Common Cause Australia, network agency

Support the campaign and sign the petition on
www.surfcoast.climateemergencydeclaration.org

Feature forum at the National Sustainable Living Fesival in Melbourne in February 2019 with some of the remarkable councillors who are at the forefront of the world’s first climate emergency mobilisation effort, acting locally and spreading globally.

“City governments around the world are on the move. In the space of just 12 months, a growing number of city councils are showing extraordinary leadership as the climate crisis escalates. Now spreading into an international movement that started in Australia, city councils are stepping forward as the first level of government to declare a climate emergency. In this extraordinary development, government officials are facing up to the true level of climate risk and are stridently developing climate emergency mobilisation plans and advocating to protect their citizens.”

“We are the leaders of this community and everybody is looking at us to make a difference. I just can’t sit by anymore and do these piddly things that we’re doing. We know it’s going to be expensive; we know it’s going to take staff time to build these into our financial plans but we have to start putting money into reserves. We have to make plans so at the very least if we can do this we’re taking a step forward and we’re telling the community that this is an urgent matter and we are getting in front of it as best we can at this late date.”

City of Powell River councillor CaroleAnn Leishman said she is losing sleep over climate change. At one point during her impassioned argument on the subject at the regular council meeting on 21 February 2019, she broke into tears over her desperation.

She requested that within 90 days, city staff prepare a report outlining the greatest threats to the city, both corporate and community, with respect to climate change impacts.

It includes: estimated sea level rise, wildfire threats, increased flooding events, potential contamination of the watershed and other immediate perceived threats; beginning discussions between the city, regional district and Tla’amin Nation for establishing an advisory committee for disaster and emergency response planning with the regional manager of emergency services taking the lead; establishing “Climate Action Plan 2020 and Beyond” for a carbon-neutral City of Powell River; beginning to track financial implications of climate change impacts not only in city asset management plans but in all city departments; and becoming carbon neutral in the city’s corporate operations from 2019 and beyond.